Here’s my pre-season analysis and projection for the Premier League.

I use a simple shot based model to assess teams, it’s explained here – but to summarise, it works out each team’s attacking and defensive strength by applying factors to goals, shots and shots on target, to produce a rating I call “adjusted goals”.

My starting point for estimating the relative team strength for this season is last year’s Adjusted Goals rating. This gives the following (after making adjustments for the promoted teams to take account of the higher standard of opposition).

As I discussed here, Tottenham’s numbers last season were impressive, they were the season before too.

With an unprecedented amount spent on new players during this year’s Premier League close season – incoming and outgoing players will surely have a significant effect on relative team strength.

To assess the effect of player turnover, I adapt my Adjusted Goals rating to individual player level (explained here) by trying to determine each player’s contribution to their team’s rating – taking account of attacking and defensive actions such as goals, assists, passes, tackles and blocks. Converting my team ratings to a player rating does have flaws, but it gives a reasonable indication of the effectiveness of new players.

Here’s all the new players recruited by Premier League teams to date (30/07/2017) that I’ve analysed, from best to worst – according to my ratings (not including goalkeepers).

So, according to my ratings, two players from Real Madrid are the best players bought by Premier League teams this close season. This, to an extent, shows how these ratings are biased towards players from strong teams. And I doubt many would identify Danilo as the top summer transfer. He only played 17 times for Real last season – but his underlying numbers were strong, in comparison to his teammates. Danilo’s transfer was somewhat overshadowed by Walker and Mendy as part of City’s wing-back splurge, but I wonder whether this could prove to be the best value.

This table also reveals some other high quality purchases that seem to have gone under the radar. Brighton, in particular, appear to have done well to get Gross and Suttner. I’ve never watched Ingolstadt play but, from the underlying numbers – these two were by far their most effective players last season, playing at a strong level in the Bundesliga.

At the other end, Spurs – without no in-comings and the departure of one of last season’s best performers, have worsened. The only other team that have so far failed to strengthen on last season are Southampton.

Also, despite some good signings, I only show a small improvement in Manchester United. This is mainly due to departure of last years most effective player – Zlatan Ibrahimovic.

After allowing for player turnover, I also try to take account of other factors likely to affect a team over 2017/18, which didn’t impact them last season.

This is where it gets more subjective. The main reason to make an adjustment is European involvement – a long European run affect’s player fitness and priorities. Conversely – not playing in Europe, as Chelsea illustrated last season, can be a significant advantage.

Another (very subjective) allowance that needs to be made is for the impact of Spurs playing home matches at Wembley.

Prior to last season I made some similar subjective adjustments to teams’ ratings – and it turned out that in each case it was right to do so, but the adjustment wasn’t large enough.

So, here’s the list of this season’s subjective adjustments – together with the reasons for them: 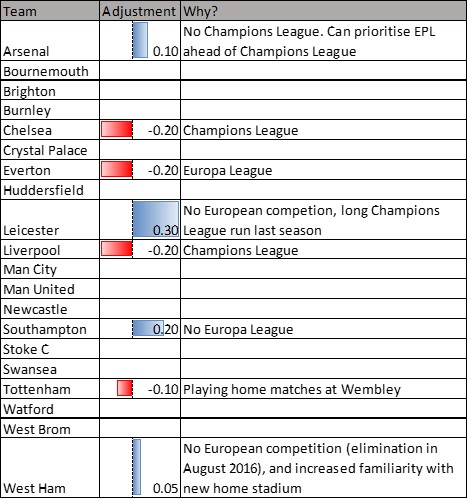 Putting all this together, I get to the full 2017/18 season projection. This simulates 5000 EPL scenarios to calculate the probability of potential outcomes using the team ratings described above.

So, Man City’s squad strengthening and a reduction in Spurs home advantages puts City just ahead in the overall projection. It’s the usual top six, but I’ve got a reasonably large gap between the top 2 and the remaining 4.

Burnley are projected bottom of the pile (but Sean Dyche is an expert at confounding the underlying numbers) and I expect Huddersfield to  struggle. Brighton and Newcastle have good survival chances.

A good test of any prediction is to compare it to the market. The chart below shows expected points against Sporting Index point predictions. 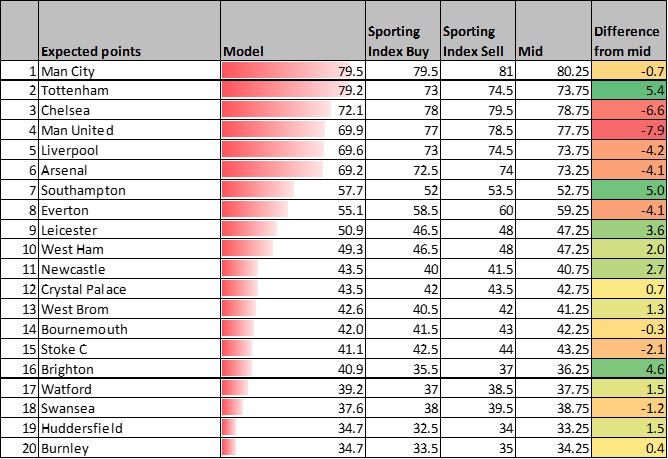 As expected the projection is reasonably consistent with the market. However – there are some notable anomalies. Spurs, as usual, seem undervalued and the market is more bullish on Chelsea and Man United than my model.

At the other end of the table I’m close to the market, other than for Brighton.

Does the model identify any value worth betting on? Well, this time last year, Spurs looked great value for the title and to finish in the top 4 – and there was genuine value. The same appears true this year. There are good reasons to be wary of Tottenham this year – playing at Wembley, no new signings, losing Kyle Walker and competitors strengthening (as well as a 3-0 friendly defeat to Man City). But the squad that’s performed better than any other over the last 2 seasons is still in tact, so 10/1 for the title (available at a number of bookies) seems high. Whatever the concerns, I think that Spurs’ title likelihood is far higher than the 10% implied by the odds.

I’ve carried out my projection 2 weeks before the start of the season, and a month before the close of the transfer window – so much can change quickly. I update my ratings for match results and any further squad changes – and then use as the basis for further projections and individual match modelling.

I’ve also posted some spreadsheet calculators, that use the underlying ratings to:

goal projections, where team ratings can be adjusted

Chart goals and cleansheets over a given number of game weeks

All useful for assessing value (and fantasy football strategy)

*I’ve updated the player turnover tables in this article after the close of the August transfer window. But not changed the pre-season projection. Updated squad strength will be reflected in my week 4 projection, here