After a magnificent seven Premier League match weeks, it’s that time when an unscrupulous and powerful organisation disturbs the peace by imposing its will on agitated locals – the horrific International Weekend.

The Bounty Hunter
This enforced hiatus already prompted one City to enlist the services of an American bounty hunter, to assemble a team capable of preserving the status of an isolated outpost. And, it’s an appropriate time to assess whether the other 19 Premier League clubs have the defensive and attacking capabilities to see them through the season.

In football, as in Rose Creek, shots-on-target is a currency that matters. If you get in more than your opponent you normally win. Here’s how the teams have fared so far: 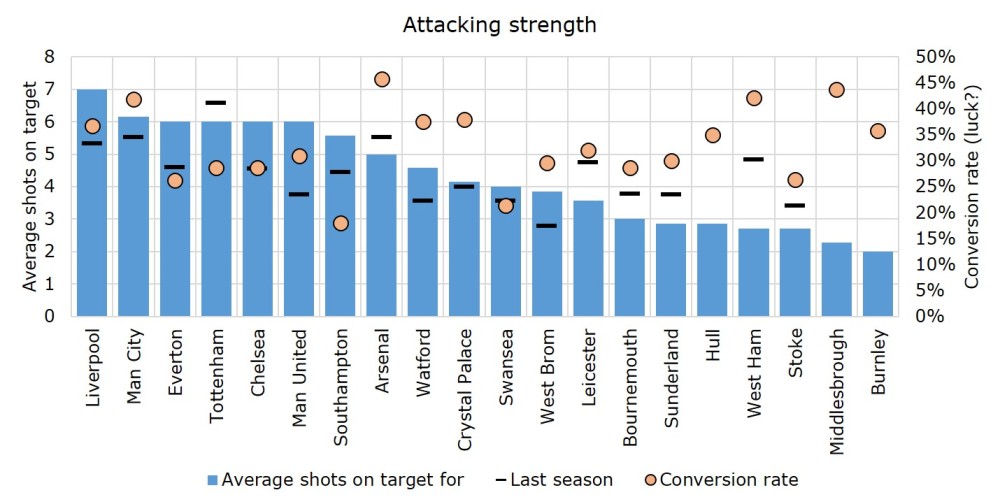 These charts aren’t a bizarre visual perception test, but a summary of each team’s strength, based on shots-on-target (SOT). The blue bars show average SOT (for or against) ordered from best to worst. Also shown are last season’s averages (to help evaluate improvement or decline in performance) as well as conversion % and save %. Conversion rate is the percentage of shots scored – this can be used as a rough indicator of luck. For example, one individual shot may fortuitously have the desired outcome, but over the long-term the success rate normally stabilises (to around 35%). So a high conversion rate can indicate short term luck – although, an elite marksman is obviously able to maintain a high success rate. Save % is a similar indicator for shots-on-target conceded.

The Gambler
Jose Mourinho gambled more than £100m on a return to success. And United have improved, particularly in attack – but early indications suggest they’re not quite at the desired elite level.

The Sharpshooter
Down the track, Pep Guardiola marshals an attacking posse led by master sharpshooter Sergio Agüero. City always post great attacking numbers, and they do so this season. But defensively there’s a hint of fallibility – conceding shots at a similar rate to last season, perhaps flattered by a high save percentage.

The Tracker
Slaven Bilić tracked his team across East London to a new homestead, only to find it inhabited by unruly natives, intent on spoiling his plans for domination. The Hammers’ shot numbers (both for and against) have seen a shocking decline from the Boleyn days. West Ham’s current league position truly reflects their form. It may take time to adjust to new surroundings, but one to watch.

The Assassin
Seemingly unnoticed, Mauricio Pochettino’s Hotspurs are quietly eliminating opponents. Tottenham maintained spectacular shot numbers throughout last season, and they’ve continued in the same manner this year. Their percentage of shots-on-target saved is perhaps unsustainable, but even-so it’s surprising how betting markets (and pundits) appear to under value Spurs.

The Outlaw
Without Big Sam, now imprisoned by hubris and British investigative journalism, Sunderland are in a familiar position – struggling, with little indication of improvement. Their shot numbers back this up, with a decline from last season.

The Warrior
Jürgen Klopp’s leading an all out assault on the Premier League; Liverpool are blasting an average of 7 shots on target per match, destroying opponents (other than Burnley). It’s all the more impressive considering they’ve played 5 out of 7 away from Anfield – including Arsenal, Chelsea and Spurs.

And the rest
After running out of wild-west inspired sobriquets it’s time to review the rest. First mention to Everton – only 14 shots-on-target conceded in 7 matches, and attacking improvement too – they’re heading in the right direction. Chelsea have improved significantly from last year – despite a couple of poor results. Arsenal, well…they’re Arsenal – good, but not quite good enough. Stoke should be concerned and Hull City are showing that their first couple of results were most likely a blip.

In last season’s Premier League the underdog overcame overwhelming odds to win the day in the end. This season a Hollywood ending seems less likely (although Everton and Southampton may give it a go). But thankfully in football, unlike blockbuster remakes, the ending remains uncertain.