The 2016/17 season is shaping up to be one of the least memorable in Town’s history. A season where the club’s lack of investment is cruelly exposed – seemingly petering out to a bottom-half, but safe, finish.

February brought a fleeting upturn in form – delivering draws, that could have been wins, against accomplished opposition, as well as an unlikely victory against Aston Villa. Disappointingly, but predictably, Town have now reverted back to tactics designed to target stalemate. And boy have they succeeded – with a run of six 1-1 or 0-0 draws.

Town’s injury time equaliser on Saturday yielded another point, yet resulted in a diminishing gap between Ipswich and the relegation zone.  It’s now only 7 points, with 9 matches remaining. Raising the question – could 2017 be memorable for all the wrong reasons – relegation to the third tier of English football for the first time in 60 years?

To calculate Town’s chances of relegation I simulate 5000 different league outcomes. The outcome of each match is determined randomly – but each team’s average attack and defence strength comes from my adjusted goals rating system. This is a simple method for rating teams’ performance, worked-out by combining Goals, Shots-on-target and Shots, for and against each team.

The current rating for each team is as follows: 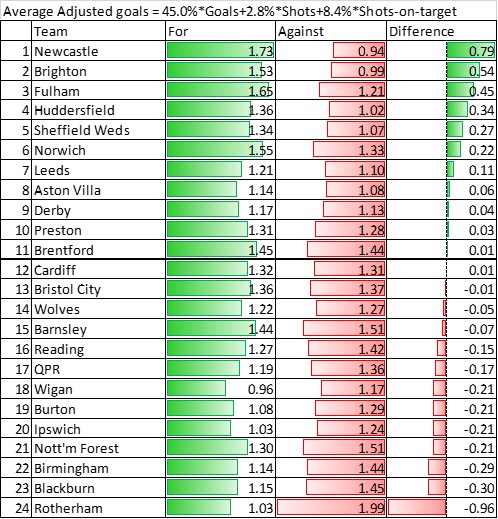 This shows that my system rates Ipswich as 20th best team in the League. Unsurprisingly with one of the worst attacks (but not as bad as Wigan’s!).

Putting these ratings into my projection model for the remainder of the season gives the following relegation chances: 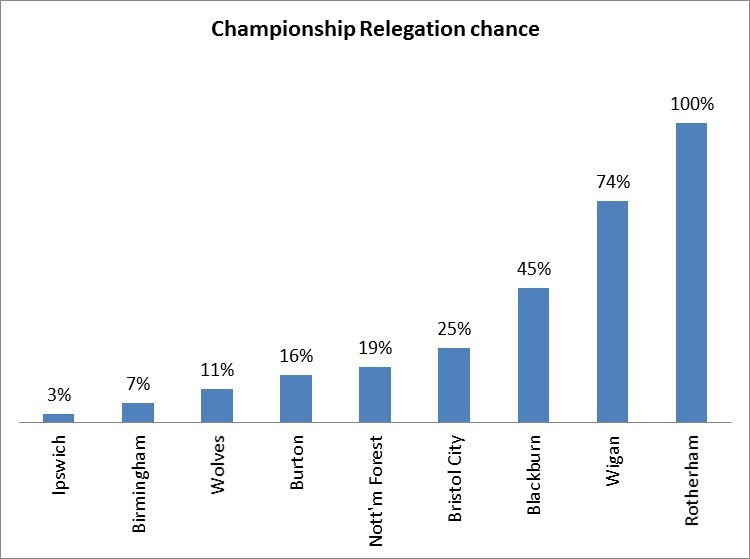 So, Town’s relegation chances are only 3%. Given the way they’re playing and the 7 point gap it feel’s more than this. Another way to assess likelihood is to look at betting odds – Ipswich are best priced 45/1 for relegation – which implies a 2.2% relegation chance, which isn’t too far from the model.

My model has Town finishing on an average of 56.1 points, which is an average of 1.23 points per match for the remaining 9 fixtures. To achieve this they’ll need obviously need to break the cycle of draws.

Intriguingly four of these are against potential relegation rivals (not counting Rotherham). These games could be pivotal, so I’ve looked at a couple of specific scenarios for the last 9 matches. First off, what happens to relegation likelihood if the draw sequence continues for the rest of the season. Happily, Mick’s stalemate strategy would be rewarded with near certain survival – not one the 5000 scenarios results in Town’s relegation, with a point per game return (crucially denying points to those below them).

In terms of outcome McCarthy’s tactics make sense. Draws work. Compare that against a scenario where Town release the tactical shackles, but end up losing the remaining 9 matches. If this happens there’s an 85% chance of relegation.

So, in conclusion, will Town get relegated? With Mick’s pragmatic tactics it’s highly unlikely. But here’s hoping this season marks the nadir of Ipswich’s trajectory.