Even early in the season, Saturday’s Manchester derby appears one of those matches that will have a significant bearing on the Premier League title. Added to this it’s the first meeting of the teams’ two new managerial behemoths – so it seems appropriate to give this game added scrutiny from a modelling point of view.

For this match , I’m setting out the steps I go through to carry out detailed match modelling and determine whether there’s any market value.

Step 1 – Compare the underlying strengths of the two teams.

For this I use my Adjusted Goals rating system. The current values I’m using for the two teams are:

The attack and defence ratings are effectively the goals each team would be expected to score and concede against an average team (on a neutral ground). This shows that both teams are equally matched – with Man U having a better defence, Man City a better attack.

Step 2 – Take account of any major injuries or suspensions

The significant team news (that I’m aware of) is that Agüero is banned, I’ve assumed that Iheanacho takes his place. By taking account of how much each player affects a team’s rating I’ve worked out that Man City’s attack rating reduces by 0.08 to 1.87.

I then use average goals for a home and away team (from last season), these are 1.49 and 1.21 (so the model’s allowing for an average home team advantage of 0.28 goals).

Goals expected for each team are:

The above modelling suggests that an average of 2.86 goals are expected. Does this make sense, given the likely tactical approach? Probably not. Even though both teams possess strong attacking options, Mourinho in particular is renowned for adopting cautious tactics in big matches. Take a look at Chelsea’s results against big clubs in 2014/15 under Mourinho.

Half the matches ended in draws and half had exactly 2 goals. Other than the crazy 5 3 defeat against Spurs, all the matches were cautious, particularly the two against their main rivals Man City – both of which finished 1-1.

There seems a reasonable likelihood that we’ll see a similar tactical approach in this match – as well as potentially both teams reasonably happy to settle for a draw.

2 goals seems a reasonable average to expect for this match – so I’ve scaled down the goals expected for each team to:

There are a number of ways to do this. One is to use a Poisson distribution to work out individual scores, but I use a model that simulates potential match outcomes, taking account of different game-states (explained here) – using this approach allows me to take account of increased draw motivation (by allowing for more caution when the score is level).

These are the results (using maximum odds from oddsportal.com). I definitely see value in the draw and under 2.5 goals (and small value in Man U to win). [So it will probably be another 6-1 to City!] 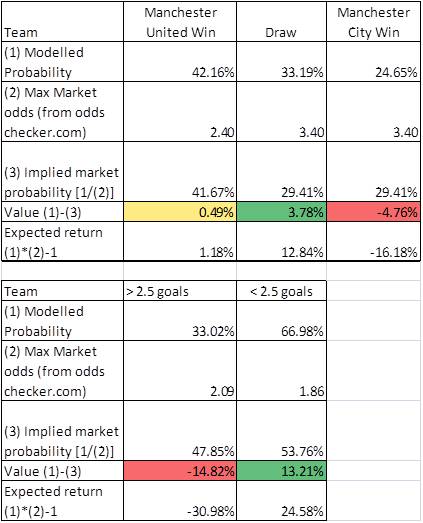 Note: when posting probabilities for each weekend’s matches I don’t carry out step 5 (tactical approach), which inevitably includes some subjectivity